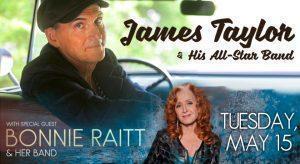 UPDATE on 4/30/18: The North Charleston Coliseum released a statement saying, “Due to an unexpected medical situation that requires immediate attention, Bonnie Raitt will no longer be able to join James Taylor & His All-Star Band for the first portion of their previously announced summer tour.  Following her annual physical, it was determined she needs to schedule some surgery soon. The prognosis is good and a full recovery is expected.”

The North Charleston show will now be an “Evening with James Taylor & His All-Star Band,” featuring two sets with a brief intermission.

Legendary singer/songwriter James Taylor and his All-Star Band with special guest Rock and Roll Hall of Famer Bonnie Raitt and her band are coming to the North Charleston Coliseum on May 15th. Tickets go on sale Friday, February 2nd at 10 am.


Over the course of his historic 40-year career, Taylor has sold more than 100 million albums, won multiple Grammy awards, and been been inducted into both the Rock and Roll and Songwriters Hall of Fame. He legend has also earned 40 gold, platinum, or multi-platinum awards. Plus, he was award the Presidential Medal of Freedom (2015) and was a recipient of the Kennedy Center Hono (2016).

Some of Taylor’s best-know performances include “Fire and Rain,” “Carolina in My Mind,” “You’ve Got a Friend,” “Sweet Baby James,” and “Shower the People.”

Taylor last played at the Coliseum in 2014. You can see pictures and the set list from that show here.

She is known for songs like “Something to Talk About,” “I Can’t Make You Love Me,” “Runaway,” and “Love Sneakin’ Up On You.” Four of her studio albums have gone Platinum or better.