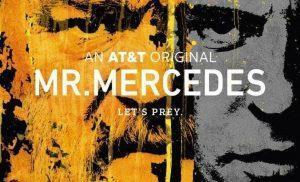 Mr. Mercedes, a television series based on a best-selling Stephen King series, will return to the Charleston area to film its second season. Production on the AT&T Audience Network show is expected to begin within the first few weeks of February and extras are needed.

The first season centered on a demented killer who taunts retired police detective Bill Hodges with information about a mass murder involving a stolen Mercedes.

According to Deadline, the second season will be ten episodes long and will be based on King’s best-selling “Bill Hodges Trilogy,” which includes Mr. Mercedes, Finders Keepers, and End of Watch. It is scheduled to air in the summer. David E. Kelley will again write the script, while Jack Bender will direct.

TW Casting will handle casting for extras, so if you are interested, visit their Facebook page. Casting calls for specific extras roles and stand-ins will likely go up towards the end of January, but you can submit a general submission now.

You can see a trailer from the first season below.

Mr. Mercedes is the latest production to film in the Holy City, which has become a popular spot for both TV and cinema projects. Other productions that have called the Charleston area home include Top Chef, Vice Principals, Southern Charm, Naked, Leavey, The Inspectors, The Sinner, Reckless, and South of Hell.