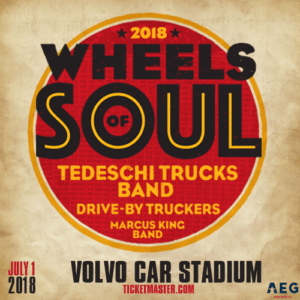 The Holy City may have just finished thawing out after a rare storm, but it’s never too early to start looking forward to warmer temperatures and summer concerts. Volvo Car Stadium this week made their first concert announcement of the year – the fourth installment of Tedeschi Trucks Band’s annual multi-band Wheels of Soul tour.

The concert will be held on Sunday, July 1st and also includes Drive-By Truckers and The Marcus King Band. Tickets are already available for fan pre-sale, while the general public on-sale starts on Friday at 12 pm. Click here for more information.

The 12-member Tedeschi Trucks Band, led by the husband and wife team of guitarist Derek Trucks and vocalist/guitarist Susan Tedeschi, carries a reputation as one of the best live bands performing today. They play music from their own catalog of Grammy Award-winning originals and several exciting cover songs.

The band’s latest release, Live From The Fox Oakland debuted at # 1 and # 6 on Billboard’s Blues and Rock Album charts, respectively, and was nominated for the Best Contemporary Blues Album Grammy Award.

Drive-By Truckers are a southern American rock band that were founded in 1996 by singer/songwriter/guitarists Mike Cooley
and Patterson Hood.

The Marcus King Band performs a fiery brand of American roots music that led The Philadelphia Inquirer
to proclaim, “Marcus King is about to become a Southern rock guitar superstar.”

Visit www.volvocarstadiumconcerts.com for more informaton on the Wheels of Soul tour.
–

Jimmy Buffett & the Coral Reefer Band to Perform at the Coliseum