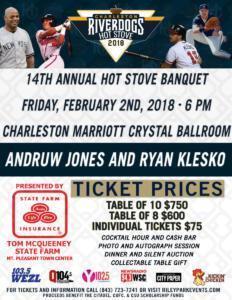 With a ticket that already featured a Hall of Fame candidate in Andruw Jones, the Charleston RiverDogs weren’t finished when planning this year’s Hot Stove Banquet. The club has announced that former Braves slugger Ryan Klesko will join his former teammate on the lineup card for the 14th edition of the annual event on Friday, February 2nd.

A World Series champion with Atlanta in 1995, one year before Jones’ call up to The Show, Klesko enjoyed a Major League career that spanned 16 seasons with the Braves, Padres, and Giants. The lefty slugger finished third in the Rookie of the Year voting in 1994, and was named an All-Star in 2001 with San Diego.

Klesko most famously made history with the Braves in ‘95 when he became the first player in history to hit a home run in three consecutive World Series games. Over his career, he hit .279 with 278 home runs and 1,564 total hits in the regular season. His .525 career slugging percentage with Atlanta still ranks fifth all-time in Braves history.

The Hot Stove Banquet is hosted by the Charleston RiverDogs each year with past speakers including Bobby Cox, John Smoltz, Tom Glavine, Ryne Sandberg, Wade Boggs, and Goose Gossage in an event that brings baseball fans together to celebrate the magic of America’s pastime. Proceeds benefit The Citadel, College of Charleston and Charleston Southern baseball scholarship funds. The banquet, which will be held on the evening of Friday, February 2 at 6pm in the Charleston Marriott Crystal Ballroom, is presented by Tom McQueeney State Farm Insurance for the 11th consecutive year.

Headlining this year’s ticket, the five-time All-Star Jones collected over 1,900 hits and slugged 434 home runs over a 17-year big league career. The “Curacao Kid” played 12 seasons with the Braves, and finished his career in pinstripes over two seasons with the Yankees. One of the premier centerfielders in history, he won a gold glove and hit at least 20 homers for ten consecutive seasons from 1998-2007, along with garnering a Silver Slugger Award in ‘05. He became the youngest player to hit a home run in the World Series as a 19-year-old with the Braves in 1996.

For tickets to the Hot Stove Banquet and additional information, please contact the RiverDogs Special Events Department at (843) 577-DOGS (3647) or visit www.RileyParkEvents.com. One-of-a-kind meet and greet opportunities with Jones before the event are available now for auction online at riverdogs.com/auctions.

The Charleston RiverDogs, the Class A affiliate of the 27-time World Champion New York Yankees, are Charleston’s leader in affordable sports entertainment. Recently recognized with the Bob Freitas Award as the top Class A operation by Baseball America in 2017, the RiverDogs are coming off their most successful season when they welcomed over 300,000 fans through the turnstiles for the first time in franchise history.

RiverDogs season tickets, group tickets, and flex plans, including options to the Riley Park Club, are now available for the 2018 campaign, the club’s 25th season as the RiverDogs and their “175th in dog years.” The RiverDogs begin the season on April 12 when they host the Kannapolis Intimidators at The Joe after a week on the road and an exhibition opener at The Joe on April 3 against Myrtle Beach. Ticket information can be secured by contacting the box office at (843) 577-DOGS (3647) or online at www.riverdogs.com/tickets.