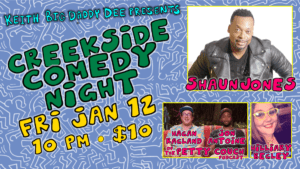 Creekside Comedy Night returns on at 10 pm on Friday, January 12th at Creekside Kitchen and Brewhouse. This month’s show will include performances by The Shaun Jones Experience, Hilliary Begley, and the Petty Couch Podcast’s Hagan Ragland and Jon Antoine.

​Shaun Jones has made several television appearances on networks like BET and STARZ. He was also in the 2003 motion picture Shade starring Jamie Foxx and Sylverster Stallone. He played the crooked poker player, Mr. Ose. Jones has been part of the comedy world for over two decades.

Hagan Ragland and Jon Antoine are Charleston natives and co-hosts of the hilarious Petty Couch Podcast.

Tickets for Creekside Comedy Night are $10 and can be purchased here. Creekside Kitchen and Brewhouse is located in West Ashley at 2600 Savannah Highway.