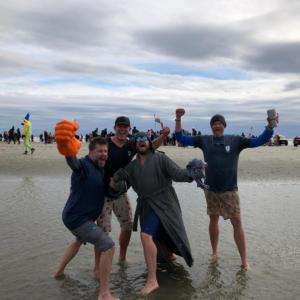 Danny McBride is becoming more ubiquitous than Bill Murray. It seems the actor, comedian, and writer, who owns a house in the Charleston area, is spotted soaking in the Holy City on a regular basis, and his public appearance on January 1st certainly made quite the splash.

McBride started the new year by participating in Sullivan’s Island annual Polar Bear Plunge. He posted a series of photos on his Instagram account documenting the experience. His caption on the collage read:

McBride co-created, starred in, and wrote Vice Principals, a HBO series that was filmed in the Charleston area. The show ended its planned two-season run last year.

In addition, he is one of the writers behind the latest Halloween revamp, which is also filming in and around the Holy City. The movie is expected to arrive in theaters this October.

South Carolina Aquarium Offering Buy One Admission, Get One 50% Off this Weekend