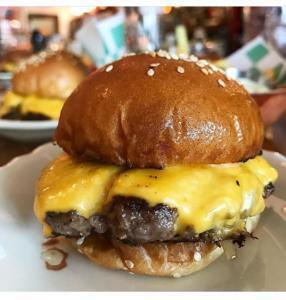 Bon Appetit has chosen the Tavern Burger at Little Jack’s Tavern as the country’s best of the year.

Here’s what the magazine had to say about the popular menu item:

“I can’t fully explain why or how the Tavern burger reaches such gustatory heights, but I do know that simplicity has a lot to do with it. For a mere $8, a juicy four-ounce, 75/25 meat-to-fat ratio patty made from half chuck, half brisket is griddled, topped with a sunchoke relish that mimics the flavor and texture of long-cooked onions, and is then topped with a gooey slice of American cheese and mayo-based “special” sauce. It’s all tucked inside a super-soft sesame bun, which you can pick up with one hand.”

You can see the Bon Appetit article here.