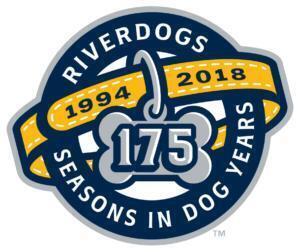 The celebratory logo was created by Studio Simon, who also redesigned and refreshed the RiverDogs’ logo package in 2015. The dog collar logo balances the history and tongue-in-cheek fun synonymous with the RiverDogs brand.

Along with a brand-new promotional calendar in the works, the club will take time to reflect on some of the best RiverDogs theme nights of yesteryear. The club will also highlight their storied history of former players with the likes of Josh Hamilton, Aaron Judge, Alex Rodriguez, and Delmon Young all having once suited up in the RiverDogs uniform.

Charleston has played host to a minor league baseball franchise as early as 1886 when the Seagulls first took the field as members of the Southern League; the city has since played host to more than 70 seasons of professional baseball. After a one-year absence without a team, Charleston became a founding member of the South Atlantic League in 1980 when the Charleston Royals began play at College Park, later becoming the Rainbows when the club switched affiliations to San Diego in 1985.

The “RiverDogs” played their first season in 1994, rebranding under their Goldklang Group ownership, who initially purchased the club in 1989. The Goldklang Group helped the RiverDogs transition to Joseph P. Riley, Jr. Park in 1997, and continue to oversee the club under their most successful seasons today.

The Charleston RiverDogs, the Class A affiliate of the 27-time World Champion New York Yankees, were recently recognized with the Bob Freitas Award as the top Class A operation by Baseball America. In 2017, the RiverDogs are coming off their most successful season when they welcomed over 300,000 fans through the turnstiles for the first time in franchise history.

RiverDogs season tickets, group tickets, and flex plans, including options to the Riley Park Club, are now available for the 2018 campaign. The RiverDogs begin the season on April 12 when they host the Kannapolis Intimidators at The Joe, preceded by a weeklong road trip and an exhibition opener at The Joe on April 3 against Myrtle Beach. Ticket information can be secured by contacting the box office at (843) 577-DOGS (3647) or online at www.riverdogs.com/tickets.