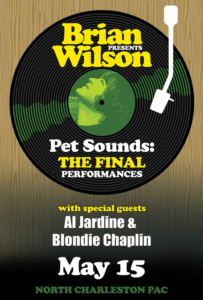 UPDATE: “Due to a previously unforeseen venue scheduling issue, the Brian Wilson concert planned for May 15 at the North Charleston Performing Arts Center has been postponed to July 25. All tickets previously purchased will be honored for the new date. Fans unable to attend the new date may receive refunds by contacting their point of purchase. We’d like to offer our apologies to both Brian and his fans for this inconvenience but look forward to bringing him to North Charleston in July.”

On , Brian Wilson, the legendary co-founder of the Beach Boys, will present “Pet Sounds: The Final Performances” at the North Charleston Performing Arts Center.

The tour celebrates the Beach Boys’ groundbreaking album Pet Sounds, which is one of the most popular and influential releases in pop-music history. The record turned 50 years old last year.

The album includes the hit songs Wouldn’t It Be Nice, Sloop John B, and Caroline, No.

Wilson will be joined on stage by fellow Beach Boys founding member Al Jardine and Blondie Chaplin, one of the band’s former guitarists, singers, and songwriters.