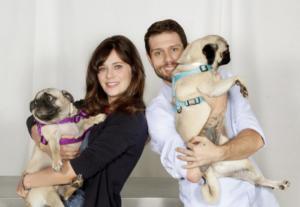 In October, Wix.com announced a contest to help promote their new online booking feature. The contest winner would be flown out to Los Angeles to join Deschanel, star of Fox’s New Girl, in a video campaign. The video features John Lee Clair, the owner of Big Shot Booth Co., dressing up pugs in costumes with the 500 Days of Summer star. You can see the video below.

“I’ve always been a firm believer that contests like this are rigged, so I was a blown away when I found out that Zooey had handpicked my photo booth business,” Clair told Holy City Sinner. “A few days later I got a notification on my phone that Zooey Deschanel booked an appointment through my website and that’s when it became real for me.”

In addition to the commercial, Big Shot Booth Co. was given a redesigned website. You can see it at https://www.bigshotbooth.co