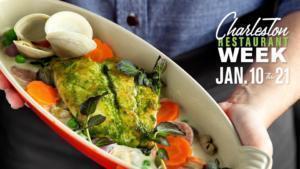 
For those unfamiliar with the culinary celebration, diners spend the “week” sampling the varying cuisine of the Lowcountry. Participating restaurants offer prix fixe menus, discounted prices, or other specials throughout the event.

Over 100 restaurants participate in Charleston Restaurant Week twice a year (both in September and January). Newcomers joining the roster this January include Grace & Grit, Ink N Ivy, and Pearlz Oyster Bar.