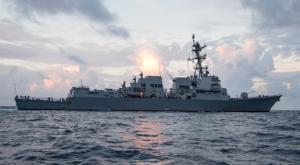 The U.S. Navy will honor local hero PFC Ralph H. Johnson, who gave his life to save his fellow Marines in Vietnam, with the commissioning of its 64th Arleigh Burke class destroyer, the USS Ralph Johnson on Saturday, March 24, 2018. The ceremony, which is free and open to the general public, requires tickets that must be reserved no later than Dec. 31, 2017.

Ceremony attendees must have tickets issued by the Navy.  To reserve tickets, guests should go to the Charleston Council of the Navy League website, www.navyleaguecharleston.org, click on the picture of the ship and then click the “invitations” tab; then complete and submit the form.  In early 2018 the Navy will mail an invitation to those who have registered via the website with instructions to RSVP.  Once the Navy receives the RSVP, they will send the tickets to the guest via the U.S. mail.

The USS Ralph Johnson is named for Charleston native Pfc. Ralph H. Johnson, USMC who was posthumously awarded the Congressional Medal of Honor for his heroic action while serving in Vietnam, where he threw himself on an enemy grenade to save the lives of his fellow Marines.  At the time of his death, Johnson was assigned to the Marine Corps’ 1st Reconnaissance Battalion, whose motto “Swift, Silent, Deadly’ has been adopted by the ship.

“The Navy League is truly honored to lead the community effort to bring the commissioning ceremony of this great ship to Private Johnson’s hometown,” said Charleston Council of the Navy League president Capt. Patrick Keaveny, USN (ret.).  “There is incredible support from so many organizations and individuals across the Lowcountry, and I cannot think of a better way to honor our native son.”

“Ralph would be so humbled,” said his sister Helen Richards upon hearing the news. “I am so thankful for all the Navy League, the VA, and so many others have done to keep his memory alive, and I cannot express what this means to me and my family.” Richards honors Ralph’s commitment to service by volunteering each week at the Ralph H. Johnson VA Medical Center.

The future USS Ralph Johnson will be commanded by Cdr. Jason P. Patterson, USN and will be homeported at Naval Station Everett in Washington.  The Ship Sponsor is Georgeann McRaven, wife of Admiral Bill McRaven, USN (ret.), former commander of the U.S. Special Operations Command.