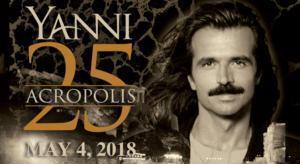 Legendary performer and composer Yanni has announced he will celebrate the 25th Anniversary of Live At The Acropolis with a world tour that will visit the North Charleston Performing Arts Center on Friday, May 4th, 2018. He last played the venue in 2016.


Live at the Acropolis was released in 1994 and is the first ever live album and concert video from the musician. Recorded at the Herodes Atticus Theatre in Athens with the Royal Philharmonic Concert Orchestra from London, the concert took a year and a half to complete. It became an incredible success and is the second best-selling music video of all time.

Over his career, Yanni has been awarded more than 40 platinum and gold albums worldwide and has sold more than 25 million albums around the world.

VIP and Fan Club pre-sale tickets for the North Charleston show will be available on December 13th. General on-sale will be December 15th at 10 am. Click here for more info.

Follow us
Related Topics:north charleston performing arts centeryanni
Up Next