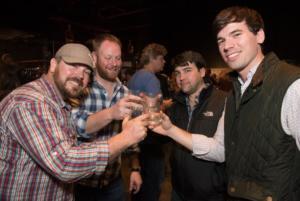 The festival’s bourbon buyers have amassed an impressive collection this year that includes multiple bottles of the most hard to find bourbons in the world.  The Pappy Van Winkle and Buffalo Trace Antiques Collection were released across the country in late November and the team acquired most of the collection, including four bottles of 15 year Pappy, considered by many to be the best bourbon in the world.

The 54 bottles in the rare bourbon bar represent one of the most extensive tasting opportunities imaginable.  And the price point for tasting these rare bourbons is well below the $60- $100 pours one would pay in the few bars that have them.  According to event producer Rebecca Gosnell, Bacon and Bourbon pours rare bourbons at their cost.  “Our goal is to give bourbon lovers an opportunity to taste as many rare bourbons as possible.  And to make that experience affordable, we divide the price we pay for each bottle by 25 pours.  This means we can pour exceptional bourbons and things you’ve never tasted for $10-$40.  The extent of this year’s collection also means we will have plenty of rare bourbon to serve all night long.”

The Rare Bourbon bar is just one facet of Bacon and Bourbon.  The admission ticket covers unlimited tastings from the 35 bourbon brands and 15 chefs on the main floor.  Those brands on the main floor will offer straight pours and cocktails.  Distilleries included on the main floor include, Breckenridge, Michter’s, Maker’s Mark, Jim Beam, Buffalo Trace and  Heaven Hill.  A new feature this year is the Master Bourbon Bar which pairs top mixologists with popular brands like Woodford, Old Forester and Bulliet.     Non-bourbon options are also avail thanks to partnerships with Blue Chair Bay Rum and Tito’s Vodka.

The event is in a new location this year. “The event has sold out every year since we began and we wanted to reward that enthusiasm.  This year we are moving from the Gaillard to “Bourbon Hall”  a 27,000 square foot space at the Charleston Convention Center but the guest number will remain capped at 1,000.  We are thrilled to have chefs from 15 local restaurants joining representatives from 25 local and national distilleries to showcase original bacon and bourbon pairings.” states Gosnell. “And now we have the room to put the bands, laser skeet shooting, bull riding and other fun elements all in the same space.”

Proceeds for the event benefit Feed The Need which provides over 500 meals per week to four area shelters.

Purchase tickets and see a complete listing of chefs and distilleries at www.baconandbourbonsc.com.