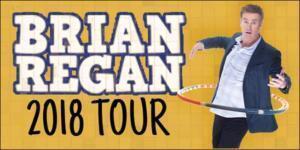 A regular on The Tonight Show Starring Jimmy Fallon, Regan made his most recent appearance on the show on November 8, 2017.  Prior to that, Regan made 28 stand-up appearances on The Late Show With David Letterman, the most of any comic in the show’s 22 years on CBS.

His previous stand-up special, Brian Regan: Live from Radio City Music Hall (2015), was the first-ever live broadcast of a stand-up special in Comedy Central’s history. The performance is available on CD, DVD, and download.

Tickets go on sale Friday at 10 am. Reserved seat tickets are available at the North Charleston Coliseum Advance Ticket Office, online at Ticketmaster.com or charge-by-phone 1-800-745-3000.