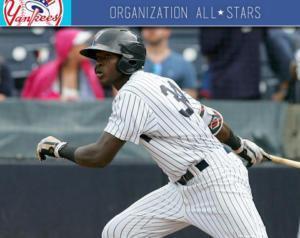 In a season that featured 77 wins and a second consecutive postseason appearance, RiverDogs fans not only enjoyed a winning team on the field, but also a glimpse of some of the future stars of tomorrow. Three members of Charleston’s 2017 playoff-contending squad, outfielder Estevan Florial, catcher Donny Sands, and right-hander Anyelo Gomez, were all named Yankees Organization All-Stars by MiLB.com on Monday.

Of the 13 Yankees minor leaguers highlighted, all but two have spent time in the Lowcountry during their MiLB career with past names including Mike Ford, Jake Cave, and Chance Adams all performing well in the high minors, and former RiverDogs Miguel Andujar and Tyler Wade each getting their first taste of the big leagues.

Along with the RiverDogs trio from 2017, outfielder Isiah Gilliam was tabbed with an honorable mention after ranking second in the organization with his 85 RBI, all collected in a RiverDogs uniform.

In a season in which the Yankees found themselves to be buyers at the deadline, the Bronx Bombers showcased their organizational depth by trading away a number of talented minor leaguers while still maintaining their position as one of the top-four farm systems in the game by MLB.com. Current RiverDogs alums residing in the Bronx include reigning AL Rookie of the Year Aaron Judge, All-Star catcher Gary Sanchez, and Cy Young finalist Luis Severino.

Florial (Yankees No. 3, Overall No. 78), was one of the most explosive players in minor league baseball this past year, showcasing an exciting combination of speed, power, and defense. Promoted to Tampa in August, the Dominican teenager left Charleston batting .297 with 11 home runs, 43 RBI, and 17 stolen bases in 91 games, before being named the league’s Most Outstanding Prospect, the first RiverDog to receive the award since Delmon Young in 2004.

The Haitian-born outfielder signed by the Yankees out of the D.R. burst onto the prospect map this season when he appeared in the All-Star Futures Game at Marlins Park on July 9, where he was one of just seven Class-A players featured among some of the game’s brightest rising stars. “Flo” was also honored by the Yankees as their Minor Leaguer of the Year after finishing out the season with Double-A Trenton, and taking his talents to the Arizona Fall League.

Sands (Yankees No. 24) was one of the most improved players on Charleston’s roster over the course of the year, rounding into form in his first full-season as a catcher. The 21-year-old Tucson, Ariz. native showed polish at the plate in an All-Star year, batting .269 in 76 games with the RiverDogs with a pair of homers and 45 RBI while reaching base at .323 clip. The former 8th round pick caught more games (76) than any other player in the league at the time of his call up, and had his best month of the season in July when he went 25-for-70 (.357) with a .514 slugging percentage in 19 games before continuing his hot finish to the year with Tampa.

Gomez, a 24-year-old out of the Dominican Republic, piled up 23 strikeouts in 14 frames to the begin the season with Charleston (while issuing just four walks) before a May promotion. The flame-throwing righty accrued a 1.93 ERA while converting all seven of his save opportunities with the RiverDogs, before finishing out the year split between High-A and Double-A. During his first full season as a relief specialist, he produced a 1.92 ERA and fanned 87 batters in 70+ innings across the three levels.

RiverDogs season tickets, half-season ticket packages, and flex plans, including options to the Riley Park Club, are now available for the 2018 campaign. The RiverDogs begin the season on April 12 when they host the Kannapolis Intimidators at Joseph P. Riley, Jr. Park, preceded by a weeklong road trip to open the year and an exhibition opener at The Joe on April 3 against Myrtle Beach. Ticket information can be secured by contacting the box office at (843) 577-DOGS (3647) or online at www.riverdogs.com/tickets.

Follow us
Related Topics:charleston riverdogsnew york yankees
Up Next