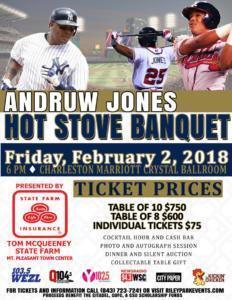 Since 2005, the Charleston RiverDogs organization has held an off-season Hot Stove Banquet & Auction featuring some of the biggest names in baseball. The 14th edition of the event will be no different as former Atlanta Braves great Andruw Jones, the winner of ten consecutive gold gloves, will be this year’s featured speaker.

The banquet will be held on Friday, February 2nd at the Charleston Marriott’s Crystal Ballroom. During the event, the former Atlanta Braves star will share behind-the-scenes stories, answer questions, and pose for pictures with attendees.

The RiverDogs, the Class-A affiliate of the New York Yankees, welcome a former member of the Braves for the eighth time and a former Yankee, also for an eighth instance in the annual event’s history. The Hot Stove Banquet has become one of the most highly anticipated occasions for RiverDogs fans each season.  Past speakers include Bobby Cox, John Smoltz, Tom Glavine, Ryne Sandberg, Wade Boggs, and Goose Gossage.

This year’s event will open at 6 pm with a cocktail hour and silent auction that includes baseball memorabilia from past Hot Stove speakers, collectibles from RiverDogs Director of Fun Bill Murray, vacation packages. Proceeds from the Hot Stove Banquet benefit The Citadel, College of Charleston and Charleston Southern baseball scholarship funds.

Here are some of Jones’s career highlights:

Individual tickets to the Hot Stove Banquet are $75 and can be purchased online at riverdogs.com and rileyparkevents.com. Groups can reserve a table of eight for $600 and a table for ten at $750 by contacting the RiverDogs Special Event Department at (843) 577-DOGS (3647).