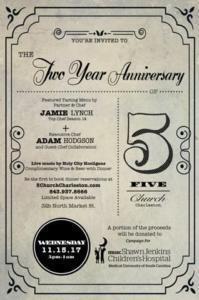 On Wednesday, November 15th, 5Church will hosts its Two Year Anniversary Celebration. During the bash, which begins at 5 pm and runs until 1 am, guests can enjoy a special collaborative anniversary tasting menu from Chef Jamie Lynch and Executive Chef Adam Hodgson, along with guest chefs Chelsey Conrad from Butcher & Bee, Tres Jackson from Sorghum & Salt, and Chef Nate Whiting from Juliet.

All diners will be treated to complimentary wine and beer and live music from Ben Fagan and the Holy City Hooligans (starting at 9 pm). Guests can also order dishes from an á la carte dinner menu.

A portion of the evening’s proceeds will be donated to the MUSC Shawn Jenkins Children’s Hospital, scheduled to open in 2019.

Dinner reservations for 5Church’s Two Year Anniversary Celebration are recommended and can be made at www.5churchcharleston.com or by calling 843-937-8666.

Daniel Island Restaurant and Music Venue to Open This Month