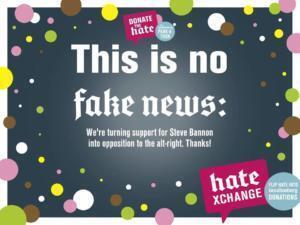 Protest organizers are inviting people to contribute to the Park-a-Thon by pledging funds based on the total number of cars coming to see Bannon speak that night. Pledged funds will go to hateXchange, which will distribute the donations through their #DonatetheHate program to Human Rights Watch, Life After Hate, and local charities in Charleston.

Organizers were inspired by the actions of a small German town called Wunsiedel, which in 2014 found a unique and funny way to deal with the neo-Nazis rallying in their streets – they made them march against their own cause. For every meter the neo-Nazis marched, organizers raised money towards programs fighting Nazis. They called it Germany’s “most involuntary walk-a-thon.” hateXchange is the official American counter-part to those organizers.

The Charleston event will feature balloons, silly banners, bad puns, and “happy fundraisers cheering on attendees and their support for a divisive political climate.” Organizers say this form of protest “offers a response that avoids violent conflicts like the tragedy of Charlottesville.”

At 6:15 pm, when Bannon takes the stage, Dr. Stuart Pimm of Duke University will lead a team of “satirical scientists” to finalize the estimate of cars based on aerial images of the parking lot and data from people counting cars on the ground. Results will be announced live via twitter.

Follow us
Related Topics:Charleston Parks the Hate Park-a-ThonhateXchangeSteve Bannon
Up Next

Hyman’s Seafood Teams Up with St. Andrews Military Ministry To Collect Donations for our Military Men and Women