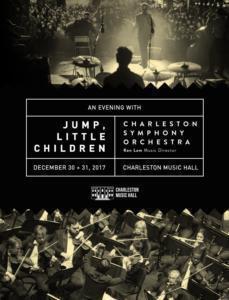 The Charleston Music Hall will close out 2017 with back-to-back nights of shows from Jump, Little Children accompanied by the Charleston Symphony Orchestra. Fans can expect to hear songs from the band’s full catalogue – with full orchestral accompaniment – and also the debut of brand new original music from the group on both December 30th and 31st.

Jump, Little Children came together in their current lineup in 1994. Based out of Charleston, they toured regionally, nationally, and internationally releasing 4 studio albums (The Licorice Tea Demos – 1995, Magazine – 1998, Vertigo – 2001, Between the Dim & the Dark – 2004), 2 EPs (Buzz – 1997, Between the Glow & the Light – 2005) 1 compilation of early material (The Early Years, Volume 1 – 2001) and a live double-album of their final performances (Live at the Dock Street Theatre – 2006). They are known for their eclectic mix of musical influences from “ethereal chamber pop” to “guitar driven alt-rock” along with high-energy live shows.

The members of the band announced that they were going on indefinite hiatus in 2005, to work on other projects and spend time with family. They reunited in late 2015 for a string of dates that sold out almost immediately. Encouraged by the response from longtime fans, the band remained open to playing more shows, and in April of 2017 they played to a huge hometown crowd at the Shovels and Rope-hosted Highwater Music Festival in North Charleston.

Encouraged by their fan base, and inspired by being together again after a decade, the band has been working on new songs with the goal of recording in the near future.  Jump, Little Children will debut at least one of these new songs live (and a wide selection of songs from their back catalogue) at The Charleston Music Hall in late December, accompanied by the Charleston Symphony Orchestra. This will be the fourth time that the band has played with the CSO.

Both nights will feature two one-hour long sets of Jump, Little Children accompanied by 20+ members of the Charleston Symphony Orchestra. The show on December 30th will start at 8 pm, with no opening act. The later start of 9 pm on December 31st allows the band to ring in the the New Year in style, and features a opening set from up-and-coming Charleston singer/songwriter Katie Rose, a proper countdown to 2018, and a balloon drop.