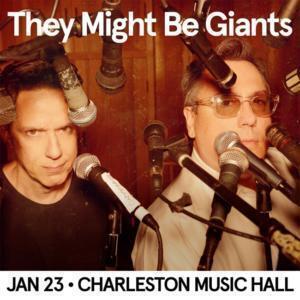 Brooklyn alt-rockers They Might Be Giants will perform at the Charleston Music Hall on Tuesday, January 23rd at 8 pm. Tickets go on sale Friday, November 3rd at 10 am.

Over the course of their career, the band has sold over 4 million records. They are probably best know for the 1990 album Flood, which has been certified platinum. Their children’s music albums Here Come the ABCs, Here Come the 123s, and Here Comes Science, have all been certified gold.

They Might Be Giants has won two Grammy Awards, one in 2002 for their song “Boss of Me”, which is most known as the theme song of the television series Malcolm in the Middle, and one for 2009’s Here Come the 123s.

Four days before their concert in the Holy City, the band will release their 20th studio album, I Like Fun, meaning the band’s set will include brand new songs, some all-time favorites, fresh rarities spanning their epic career, and spur-of-the-moment improvisations.

Tickets are $25 if purchased in advance and $30 on the day of show. A “dinner & show” option is available for an additional $32. Click here for more information.