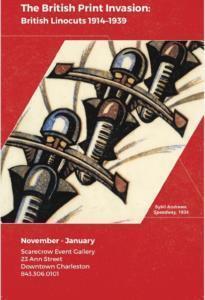 Scarecrow Event Gallery located at 23 Ann Street in downtown Charleston is proud to present the British Print Invasion Exhibit, a contemporary art collection featuring 20th century British linocuts. The previously private exhibit will be on display to the public for the first time in Charleston from November 2017 through January 2018.

Grosvenor School of Modern Art was a private art school founded in 1925 in London. From 1925 to 1930, Claude Flight taught the color linocut technique at the school, and three of his most well known students, Sybil Andrews, Cyril Power and Lill Tschudi are highlighted in the British Prints Invasion Exhibit. Linocuts are images cut into pieces of linoleum, inked, and then applied to paper. The prints feature vibrant colors and were considered modern for their time, portraying dynamic movement and common themes such as urbanism. The first exhibition of British linocuts was held at the Redfern Gallery in London in 1929. Several Grosvenor School pieces appeared in the “Modern Life: British Prints, 1914 to 1939” exhibition held at the Boston Museum of Fine Arts and the Metropolitan Museum of Art in New York City in 2008.

One of the most famous pieces appearing in the British Print Invasion Exhibit is Speedway created by Sybil Andrews in 1934. For almost four decades, the linocuts of Andrews and her contemporaries had been virtually forgotten. It wasn’t until the 1970s-80s when Andrews was rediscovered in the art world. She is now recognized as one of the Grosvenor School’s best artists. Speedway sold as the most expensive print sold by a member of the Grosvenor School.

The exhibit will be open for public viewing Wednesday through Friday evenings 6-8pm with Happy Hour Specials available in the bar area.

Visit info@spireartservices or call 843.367.0119 for more information about the exhibit.