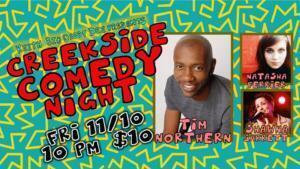 Creekside Kitchen and Brewhouse in West Ashley is hosting its second Creekside Comedy Night on November 10th at 10 pm with Tim Northern, Natasha Ferrier, and Shawna Jarrett. The show will be hosted by Keith Dee.


Here’s a little info about each comedian: