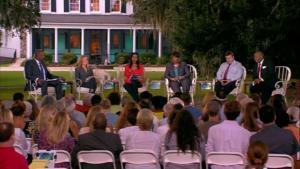 On Friday, October 13th, the BBC recorded a panel discussion about the presidency of Donald Trump near the Legare Waring House at Charles Towne Landing. That discussion, which was filmed for an episode of the network’s Global Questions series, can now be watched online (see below).


Broadcast around the world and hosted by award-winning journalist Zeinab Badawi, the program brings together leading political and society figures and local audiences to debate global and political issues.

In Charleston, a panel of political experts discussed the topic, “Trump’s America: A Nation Divided?.” This town hall discussion was broadcast on BBC World News TV, World Service Radio and BBC Online. It is now available to stream online (see below).