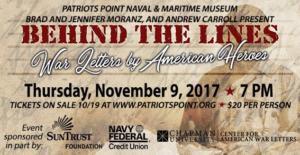 Patriots Point Naval & Maritime Museum has paired with local stage directors Brad and Jennifer Moranz, and Andrew Carroll, the New York Times bestselling author and director of the Center for American War Letters at Chapman University, to produce a special one-night performance featuring readings of real war letters and e-mails by American troops, veterans, and military families. The event will take place on November 9th at 7 pm aboard the USS Yorktown.

Tickets to “BEHIND THE LINES: War Letters by American Heroes” are available for purchase now at www.patriotspoint.org. The special one-time show costs $20 (parking is free). Those without internet access can call 843-881-5960 to purchase tickets by phone (Monday – Friday from 8 am. to 4:30 p.m. )

During the performance, professional actors will read war-time correspondences spanning from the American Revolution up to the present day. The readings will be accompanied by stirring songs and music from different eras performed by live musicians.

“For the past year we’ve poured our heart and soul into producing a program that will honor our nation’s veterans in a way that’s never been done before,” said Patriots Point Executive Director Mac Burdette. “This program will make you laugh and also bring tears to your eyes and uncover the real emotion and sacrifices that are made during times of war.”

“BEHIND THE LINES: War Letters by American Heroes” is based on Andrew Carroll’s New York Times bestselling books, including Letters of A Nation, Behind the Lines, and War Letters. It is produced and directed by Broadway veterans Brad and Jennifer Moranz.

“Seeking out and preserving war-related correspondence is my life’s work,” said Andrew Carroll. “To write the script for BEHIND THE LINES, I read through thousands of letters and emails to ensure that this program captures the breathtaking drama of battle, as well as the courage, heroism, and even humor of those who have served this country.  This is a one-time event that you won’t want to miss.”

Return of the Mac Off: Charleston’s Cheesiest Event Set for 11/4