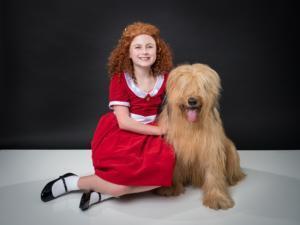 The perfect family friendly musical for the holiday season, The Footlight Players brings everyone’s favorite redhead to life in a production of “Annie.” Performances are Dec. 1-17 at the historic Footlight Theatre, 20 Queen St.

This musical has become a worldwide phenomenon and the winner of seven Tony Awards, including Best Musical. The beloved book and score by Tony Award winners Thomas Meehan, Charles Strouse and Martin Charnin features some of the greatest musical theatre hits ever written, including “Tomorrow.”

With equal measures of pluck and positivity, little orphan Annie charms everyone’s hearts despite a next-to-nothing start in 1930s New York City. Annie is determined to find the parents who abandoned her years ago on the doorstep of a New York City orphanage that is run by the cruel, embittered Miss Hannigan. With the help of the other girls in the orphanage, Annie escapes to the wondrous world of NYC.

This Footlight production is directed by Courtney Saree with assistant director Annie Reid, music director Laura Turner and choreographers Lily Watkins, Christine Cleary and Lydia Brown. Sarre is the co-founder of Musical Theater Center in Mount Pleasant and has been directing children for more than 20 years. She is a former professional performer at Walt Disney World and has taught a several Charleston area schools.

She said, “I wanted to direct Annie because it is a classic holiday show with both poignant and uplifting overtones. I also knew we had the talent and capability to assemble an amazing creative team and cast with actors from the community and from the Musical Theater Center.”

About The Footlight Players