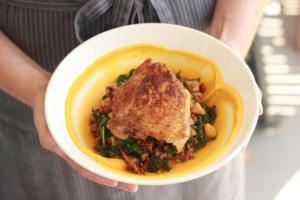 On Thursday, October 19th at 7 pm, Charleston chef Sarah Adams invites you to attend her first digital cooking class that will stream live on the internet thanks to the new, female-owned startup called AndMe TV.

The event was cooked up by Adams and Cori Banyon, who just launched the new platform for live digital experiences.
“We decided to put our heads together to create a really cool and affordable way for people to enjoy an evening cooking at home,” Adams said. “People have been learning to cook on Youtube for years…but they all lack one component – a live interaction between users and the host.”
During the first cook-along, you will be making a Pan Roasted Chicken Grain bowl with farro, shitake mushrooms, pecans, apple, kale, and butternut squash (right).
So how does it work?
After you buy your ticket to the cook-along ($25), you’ll get an e-mail with a shopping list, the recipe (vegetarian version is available), optional wine parings, and a list of tools you’ll need to participate in the event.
On Thursday night, you’ll login from a computer, iPad, or phone to cook along with Adams. Attendees will be doing all of the knife work, pureeing, and roasting together. Adams will be able to answer questions along the way and toggle between users with the help of Banyon’s AndMe TV platform.
As an added bonus, the event has teamed up with Grassroots wine to provide four wine pairings that will be available at various price points at Harris Teeter or Whole Foods.
For more information, click here!

Chef Adams is a Charleston native and has been a presence in the food scene in the city for over sixteen years. She’s worked at Peninsula Grill and FIG, where she worked her way from prep cook to sous chef over the course of her six-year tenure. Among other ventures, Adams now hosts pop-ups and group dining events. Over the past three years, she has become known not only for her cuisine, but for her philanthropy and voice for inclusion and equality within the restaurant industry.