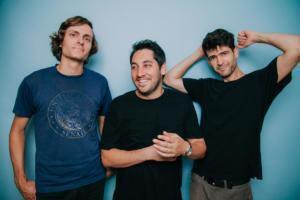 New York-based comedians Carmen Christopher, Matt Barats, and Anthony Oberbeck (aka Postmen) are coming to Charleston’s Theatre 99 to present a one-night only hour of “fearlessly ridiculous, ridiculously fearless sketch comedy.” The show takes place on Saturday, November 4th at 10 pm.The three members of Postmen met in Chicago where they performed improv and sketch with Second City, iO, and the Annoyance Theatre, and helped found the critically-acclaimed Kill All Comedy collective (Chicago Magazine’s “Best New Sketch Group”). In 2014 they moved to Brooklyn where they helped establish the New York branch of the Annoyance Theatre, including the two-year running weekly show “The Holy F@ck Comedy Hour.”Though the Annoyance has closed, the trio continues to perform have each developed pilots and web videos for Comedy Central, IFC, and Super Deluxe, contributed writing to the Onion, and appeared in shows such as High Maintenance, The Chris Gethard Show and Late Night with Seth Meyers.