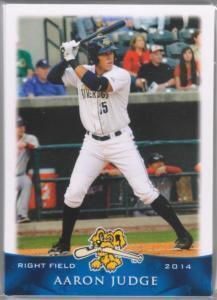 Ten former Charleston RiverDogs highlight the Yankees’ postseason roster as the Bronx Bombers take on the Cleveland Indians in winner take all Game Five in the American League Division Series on Wednesday night at Progressive Field.

Rookie phenom Aaron Judge, coming off a record 52-homer campaign in his first full big-league season, headlines a talented crop of former Charleston minor leaguers who are part of the Baby Bombers movement. Judge made his pro debut in a RiverDogs uniform in 2014, clubbing his first nine professional long balls with Charleston after a successful career at Fresno State.

Catcher Gary Sanchez, a veteran of two seasons in the Lowcountry (2011-12), took the majors by storm in his Yankee debut in 2016, pounding 20 homers and finishing second in the Rookie of the Year voting despite playing in just 53 games.

Right-hander Luis Severino’s performance on Monday night forced a decisive series finale; the Dominican hurler is one of several former Charleston arms in a dominant New York staff this year. Charleston’s footprint has been all over the flame-throwing Yankee pen this year with righties Dellin Betances, Tommy Kahnle, and David Robertson all having once called the Lowcountry home.

Native South Carolinian and former RiverDog Jordan Montgomery also features out of the Yankee pen after an impressive rookie season in the rotation.

Following a season largely lost due to injury, former Charleston first baseman Greg Bird has already come through with several clutch hits this postseason, including the go-ahead homer in Sunday’s 1-0 win to keep New York’s season alive. Bird enjoyed a breakout 2013 campaign with the RiverDogs when the Colorado native led the Minor Leagues with a .428 on-base percentage in 130 games with the RiverDogs.

College of Charleston product and Holly Hill native Brett Gardner suited up for his hometown club in a rehab stint in 2012 and has been an important top of the order producer for the Yanks. The Palmetto State native has been a mainstay in pinstripes as the club’s current longest tenured player.

Former second-rounder and catcher Austin Romine appeared in a career-high 80 games in the regular season in his longest stint with the big-league club in a crucial backup role behind the dish.

RiverDogs season tickets, half-season ticket packages and mini plans are now available for the 2017 campaign. The RiverDogs begin the season on April 12 when they host the Kannapolis Intimidators at Joseph P. Riley, Jr. Park. Ticket information can be secured by contacting the box office at (843) 577-DOGS (3647) or online at www.riverdogs.com/tickets.

Follow us
Related Topics:charleston riverdogsnew york yankees
Up Next