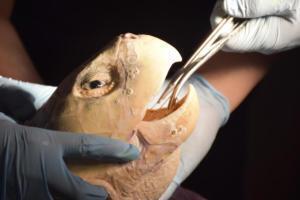 Crew aboard the SCDNR research vessel Lady Lisa and lead scientist Mike Arendt captured Peach during a routine in-water sea turtle survey at the shipping entrance to the Charleston Harbor on June 1, 2017. The crew immediately noted monofilament line entangling her neck, deeply embedded around her left front flipper, and protruding from her mouth, suggesting Peach had most likely swallowed a hook. After a quick boat transport to the Sea Turtle Care Center, STCC staff gently removed the line, but as triage progressed, they discovered monofilament line protruding from her esophagus.

An endoscopy performed by South Carolina Aquarium Veterinarian Dr. Shane Boylan revealed that the monofilament line extended through her throat and into her stomach. After cutting the line as far down as possible, it was evident the line continued into Peach’s intestines. In the first publicly-viewed sea turtle surgery in the McNair Center for Sea Turtle Conservation and Research Surgery Suite, Dr. Boylan and STCC staff successfully removed 120 centimeters of monofilament from Peach’s intestines.

“If she hadn’t been found, especially by a SCDNR vessel, she may not have survived another week. She’s the luckiest unlucky turtle we’ve ever treated.” said Dr. Boylan.

During the surgery, STCC staff confirmed that Peach is a female, and her large size suggested that she was also mature. Reproductive-aged females are very important members of the critically endangered Kemp’s ridley population. Because of her large size and the timing of her release, Peach was an ideal candidate to help answer an important research question: where do the Kemp’s ridleys that SCDNR biologists study in the summer travel during the winter? For the past two years, the SCDNR in-water sea turtle research program has focused on learning more about the movement of Kemp’s ridley sea turtles, placing satellite transmitter tags on 16 of 95 captured off the coast of Brunswick, Georgia. So far, the results have shown that the turtles rely heavily on foraging grounds between north Florida and southern South Carolina.

“Peach has gone from being a turtle on the brink of death to our first opportunity to find out where Kemp’s ridley sea turtles captured in our trawl surveys spend the winter,” said SCDNR assistant marine scientist Mike Arendt.

A satellite transmitter tag was applied to Peach’s carapace on Monday morning, and she was released back into the Atlantic Ocean from the north end of Folly Beach. Peach will now provide critical information to help scientists learn more about the Kemp’s ridley population as her journey home continues. The public can learn more about SCDNR’s sea turtle research and follow Peach’s daily journey via satellite tracking pings here.