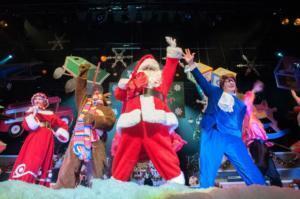 A blend of holiday classics and spiritual favorites come together to create a powerhouse of musical moments sure to get audiences ready for the Christmas season. Once again, producers Brad and Jennifer Moranz have pulled together some of the most talented musicians, dancers and performers from across the country for a brand-new Charleston Christmas Special running Dec. 8-23 at the Charleston Music Hall.

More than 10,000 people attend this production each year, making it a beloved holiday tradition for families around the Lowcountry and beyond. Readers also voted Brad and Jennifer Moranz the best Live Theater Group in the 2017 Charleston’s Choice awards sponsored by The Post and Courier.

New to the Charleston Christmas Special this year is Douglas Carpenter, who appeared on Broadway in the Carole King musical “Beautiful,” as well as the national tour of “Dirty Dancing.” Carpenter is the only singer ever to win both the American Traditions Competition (2011) and the Lotte Lenya Competition (2013).

In this year’s show, he will sing “Believe” from “The Polar Express” and Josh Groban’s version of “The First Noel” with soprano Julie Bell, who has most recently been seen headlining as featured vocalist on international cruise ships.

Also new to the Christmas Special this year is vocalist Trisha Jeffrey, a New York City actress who appeared on Broadway in the roles of Mary Wilson and Diana Ross in “Motown The Musical!” Jeffrey is the winner of the Best Actress award for her performance of Celie in “The Color Purple” for BroadwayWorld Chicago and Black Theatre Alliance Award.

Teenage operatic sensation Jenna Flaherty of West Ashley is back again this year. She will reprise her stunning rendition of “Ave Maria,” which she performed in last year’s show.

“Jenna’s performance left everyone speechless,” Moranz said. “We don’t often repeat a song from year to year, but Jenna was so incredible, we’ve already had people asking if she’ll be singing it again. It’s worth repeating, and we know the audience will be blown away once again.”

Flaherty will be joined by another talented teen, Mount Pleasant’s Kindred Moore, who has performed previously in the Charleston Christmas Special. This year, she’ll partner with show newcomer Brett Benowitz to sing Stevie Wonder’s version of “That’s What Christmas Means to Me.” Benowitz has been seen as the lead singer in the national tour of “Rockin’ Road to Dublin”and as Carl Perkins in “Million Dollar Quartet.”

Audience favorite Michael Minor returns to sing and delight the crowd with a ventriloquist act featuring Dasher, the reindeer puppet. Dasher, a self-proclaimed authority on Christmas songs, will sing a medley of “every Christmas song in the world.”

Tiffany Parker, a former cruise ship headliner and now a practicing lawyer residing in West Ashley, returns for her 15th year with the Charleston Christmas Special. Moranz says, “Men actually book their seats a year in advance to try to sit on the front row just in the hopes of being chosen to perform with her!”

Returning as musical director is James Davis Jr., who lives in New York City and has supervised musical productions at Radio City Music Hall, Lincoln Center, and The Apollo Theater.

And of course, no Moranz Entertainment show is complete without comedy sketches and dance numbers featuring Brad and Jennifer Moranz.

Soar into YelpCon on October 14th