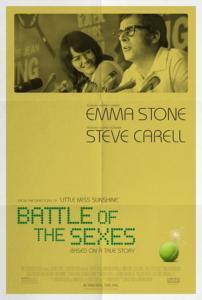 The Volvo Car Open has partnered with the Terrace Theater to host the Charleston premiere of the new movie Battle of the Sexes on Friday, September 29th at 7 pm. The movie is based on the true story of Billie Jean King, played by Emma Stone, and Bobby Riggs, played by Steve Carell, who competed in an iconic 1973 tennis match, billed the “Battle of the Sexes.”

The “Battle of Sexes” event took place in September 1973, just four months after the inaugural Family Circle Cup (now the Volvo Car Open) in May, where King competed. The match sparked a global conversation on gender equality, spurring on the feminist movement, and became the most watched televised sports event of all time.

The movie portrays the Original Nine, the pioneers of the Women’s Tennis Association. In 2012, these nine women traveled to Charleston to recreate their famous photo holding dollar bills, which at the time symbolized contracts. The same year, the Charleston tournament dedicated its stadium court to Billie Jean King.

If you can’t attend the Friday’s premiere, save your ticket stub for any Battle of the Sexes showings at the Terrace Theater to redeem for a free ticket to the Volvo Car Open’s opening weekend.

For more information on purchasing tickets to the film, visit http://www.terracetheatre.com/ or call 843-762-4247. The movie will run for a minimum of two weeks at the Terrace Theater. The film is rated PG-13.