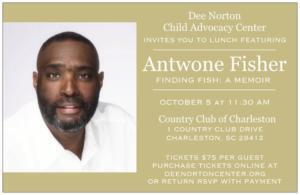 Dee Norton Child Advocacy Center, the region’s leading resource to prevent abuse, protect children and heal families, has announced the guest speaker for their annual luncheon. Antwone Fisher, writer, co-producer and subject of the film “Antwone Fisher,” will give an inspirational speech about his journey on October 5th at the Country Club of Charleston.

Born to a teenage mother in an Ohio prison, Fisher was placed into a loving foster home. Following two years of care, Fisher was moved to a home where he suffered 12 years of abuse. At age 14 he was sent to reform school where he remained until he graduated high school at 17. Emancipated from foster care, he found himself homeless on the streets of Cleveland before deciding to enlist in the U.S. Navy.  His passion for writing was realized 11 years later in a film he wrote, called “Antwone Fisher,” directed by and starring Oscar-winning actor Denzel Washington.

Among other projects, he most notably published The New York Times bestseller Finding Fish: A Memoir, the inspiring story of his incredible life’s journey; Who Will Cry for the Little Boy?, a collection of poetry; and his most recent book, A Boy Should Know How to Tie a Tie and Other Lessons for Succeeding in Life, which won the 2011 NAACP Image Award for Outstanding Literary Work.

“That BIG Book Sale” Returns for its 36th Year