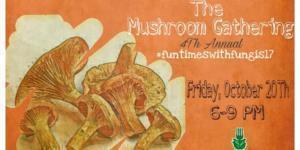 For the fourth straight year, there’s a fungus among us! GrowFood Carolina will host their annual Mushroom Gathering at their Morrison Drive headquarters on Friday, October 20th from 6 pm until 9 pm.


Local chefs and brewers will serve up mushroom-inspired food and brews. Plus, local farmers and foragers will be on hand to share their stories.

The following are expected to participate:

Tickets for the gathering may be purchased here.