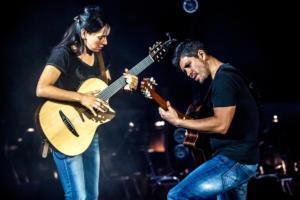 Mexican acoustic rock-maestros Rodrigo y Gabriela are set to perform at Charleston’s Gaillard Center on Tuesday, November 21st at 7:30 pm. The show is part of their tour celebrating the tenth anniversary re-release of their self-titled break-out album.

The global success of that debut record, together with constant touring, established the duo as one of the most popular acoustic instrumental artists in the world.

Since the release of that debut album 10 years ago, Rodrigo y Gabriela have accomplished the following:

The re-release of Rodrigo y Gabriela includes the newly remastered album, plus two bonus tracks, a live album, and DVD recorded at The Olympia Theatre in Dublin in 2006.

Tickets for the Charleston concert are on sale now. They can be purchased by phone at (843) 242-3099, online at www.gaillardcenter.org, or in person at the ticket office – 95 Calhoun Street.

The Music Hall will Screen “The Exorcist” with a Live Score