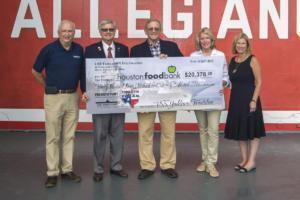 The $20,378 fund will be donated to the Houston Food Bank in honor of the museum ships USS Lexington, located in Corpus Christi, and USS Texas, located in La Porte.

“Although eyes are fixed on the future path of Hurricane Irma, we still must not forget the damage
sustained in Houston,” said Patriots Point Development Chairman Ray Chandler. “We hope this $20,000 donation provides food to many families who may not otherwise have a meal.”

Houston Food Bank spokesman Adele Brady said the “Tickets for Texas” donation will do a lot to support their relief efforts.

“Patriots Point celebrates and honors some of our nation’s bravest heroes, and we in Houston are
seeing the good works of heroes big and small, near and far, in the wake of Hurricane Harvey,” said
Houston Food Bank Director of Communications Adele Brady. “Patriots Point’s donation to Houston
Food Bank’s disaster relief efforts will help to provide much-needed food, water and cleaning supplies to the communities that need it most.”

“One of the USS Yorktown Foundation’s key missions is to help educate young people about America’s heroes while teaching leadership skills and the importance of public service,” said USS Yorktown Foundation Chairman Mike Sudzina. “Our partnership with Patriots Point for ‘Tickets for Texas’ was a way for us to lead by example. We feel that it is important to show how citizens of a great nation assist each other in a time of need.”