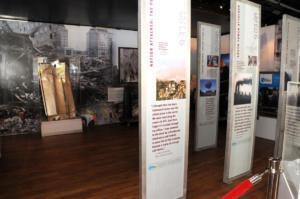 UPDATE: Due to the impending landfall of Hurricane Irma, Patriots Point Naval & Maritime Museum has canceled this weekend’s display of the 9/11 Never Forget Mobile Exhibit, and a planned preview of the upcoming Ken Burns and Lynn Novick mini-series “The Vietnam War,” scheduled for September 13.

The exhibit, which honors the more than 3,000 victims killed during the September 11, 2001 terrorist attacks, will be open to visitors Saturday, September 9th through Monday, September 11th from 9 am to 6:30 pm. Admission is free.

According to the museum, they are keeping an eye on Hurricane Irma and will announce any changes to the schedule.

The 9/11 Never Forget Mobile Exhibit will arrive in the Lowcountry at 10:30 am on Friday, September 8th. The truck will be met by Charleston area first responders at the City of North Charleston’s City Hall and will be escorted to Patriots Point.

On Monday, September 11th, Patriots Point, the Town of Mount Pleasant, and Mt. Pleasant-based plaintiffs’ law firm Motley Rice LLC will host a remembrance ceremony for the victims of the 2001 terrorist attacks. The ceremony will begin at 8:30 am in front of the 9/11 Never Forget Mobile Exhibit.

New York City firefighters Chief John LaBarbera and Battalion Chief John Carroll will be featured speakers. Both men were part of search and rescue efforts at Ground Zero the day of the attacks and for weeks afterwards. LaBarbera and Carroll are members of the Stephen Siller Tunnel to Tower Foundation Board and will serve as tour guides, along with several other New York City firefighters, for the mobile exhibit throughout the weekend. Also speaking will be Motley Rice attorney Don Migliori who, together with the firm’s anti-terrorism litigation team, represents families and survivors of 9/11.

Those who visit the Stephen Siller Tunnel to Towers Foundation’s 9/11 Never Forget Mobile Exhibit will be guided through the 1,100 square foot display by New York City firefighters. Through the presentation of artifacts, including steel beams recovered after the collapse of the World Trade Center, documentary video, and recordings of first-responder radio transmissions, guests will learn intimate details about the attacks and the ultimate sacrifice made by so many on that tragic day in 2001.

Free admission to the 9/11 Never Forget Mobile Exhibit is made possible by USS Yorktown Foundation and Motley Rice LLC.

Bay Street Biergarten to host “Sex and the City” Trivia