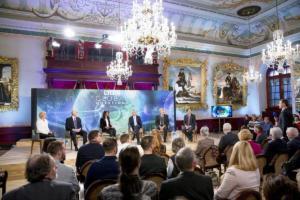 “Due to unforeseen circumstances BBC Global Questions will be changing venues. Please see details of the new venue below:

Parking is available on site. Please see a map of the venue here: http://bit.ly/2z1fJp5

If you require transportation, the BBC will be supplying a limited number of buses to depart from the College of Charleston. Please indicate if you would like to make use of this transportation by emailing globalquestions@bbc.co.uk by Tuesday 11 October 5:00PM. You will be sent details of timings and meeting point.

Your current ticket will be honored at the new location. If you are no longer able to attend kindly email globalquestions@bbc.co.ukso we can release your ticket to another participant.

Admission will be on a first-come, first-served basis and is not guaranteed. We do have spaces for up to 300 and so look very forward to welcoming you to the program. We suggest that you arrive early to avoid disappointment.

If you have not yet submitted a question please send it via email by Thursday 11 October.”

has been selected as the venue for an upcoming episode of the international BBC current affairs program Global Questions, which will feature a panel discussion about the presidency of Donald Trump.

Broadcast in the U.S. and around the world and hosted by award-winning journalist Zeinab Badawi, the program brings together leading political and civil society figures and local audiences to debate global and political issues. This important and topical town hall discussion will be recorded for broadcast on BBC World News TV, World Service Radio and BBC Online.

Past episodes of the program have tackled topics such as equality for women in Africa, Syria’s refugee crisis and Islam’s place in politics. The program has been recorded in picturesque and historic locations all over the world, including Riga, Latvia; Amman, Jordan; Cambodia; and Tunis, Tunisia.

In Charleston, a panel of high-profile political experts will discuss the topic, “Trump’s America: A Nation Divided?.” The panelists have not yet been announced.

“In the last year, the eyes of the world have been on the United States and its controversial President,” the BBC’s Badawi said of the topic to be discussed in Charleston. “Whatever your views, Donald Trump is your leader and we want to hear what you think of his Presidency one year on. The BBC has decided to come to South Carolina, a heartland of his support during the election. Global Questions will be visiting the magnificent city of Charleston to hear from people who live and work in the American South. This is your chance to put questions to a panel of political and public figures on the key issues facing Trump’s America.”

The program is asking audience members to submit their questions ahead of the recording. A selection will then be made based on the key issues that most people are interested in, reflecting a broad range of views and opinions. Questions can be submitted via e-mail to globalquestions@bbc.co.uk until Oct. 12, 2017.

Seating in Cistern Yard is limited, and tickets will be issued on a first-come first-served basis, with no assigned seating. Each guest must present a ticket for entry and must be at least 16 years of age.

Gates for the event will open at 4 pm and the audience must be seated by 4:30 pm, with recording taking place from 5 pm to 6 pm.