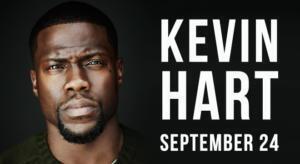 Due to demand, a second Kevin Hart show has been added at the North Charleston Performing Arts Center. The new performance will be held at 10 pm on Sunday, September 24th. Tickets go on sale today (9/15/17) at noon and will be available at the North Charleston Coliseum Advance Ticket office, charge-by phone 1-800-745 or online at Ticketmaster.com and LiveNation.com

Comedian Kevin Hart returns to the area with a show at the North Charleston Performing Arts Center on Sunday, September 24th at 7 pm. Tickets are already on sale.


Hart is well known for his stand-up specials and performances in movies like Think Like a Man, the Ride Along franchise, About Last Night, Get Hard, Central Intelligence, and The Secret Lives of Pets. Hart also stars as himself in the TV show Real Husbands of Hollywood.

The Music Hall will Screen “The Exorcist” with a Live Score