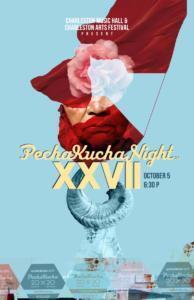 The Charleston Music Hall will pair up with the Charleston Arts Festival to present PechaKucha 27 on Thursday, October 5th at 7:30 pm. PechaKucha, Japanese for “chit chat,” is a presentation style in which 20 slides are shown for 20 seconds each (6 minutes and 40 seconds in total) keeping presentation concise, fast-paced, and powerful.

This is the Music Hall’s first PechaKucha Charleston event since it was named as the new official venue and producer of the series. Many of the original producers from Charleston Creative Parliament will still be involved in the program.

The six presenters for PechaKucha 27 will be revealed over the next few weeks. Short Grain has signed on to serve up some delicious food in front of the Music Hall during the event.

To learn more about the Pecha Kucha Global Community, the Charleston Arts Festival, and PechaKucha 27, visit the links below:

Follow us
Related Topics:charleston music hallpecha kucha
Up Next