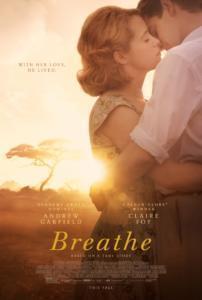 The Charleston Music Hall and The Charleston to Charleston Literary Festival will host a red carpet premiere screening of Breathe on Thursday, November 2nd at 7 pm. The event includes an exclusive introduction before the screening by the film’s screenwriter William Nicholson. A question and answer session will follow.

Breathe is an original screenplay based on a true love story of universal resonance: the life of adventurous and charismatic Robin Cavendish who, paralyzed with polio while in Africa, with his whole life still ahead of him, refused to be limited by medical advice. Breathe is directed by Andy Serkis (The Lord of the Rings Trilogy; Rise of the Planet of the Apes) and produced by Jonathan Cavendish (Bridget Jones’s Diary), upon whose parents’ story the film is based: two indomitable spirits who defy the odds and the skeptics to pave the way for change.

William Nicholson is a twice Academy Award-nominated screenwriter for Shadowlands and Gladiator (for which he was co-writer). His other film credits include Les Miserables, Mandela: Long Walk to Freedom, Unbroken, and Everest.

Follow us
Related Topics:charleston music hallCharleston to CharlestonWilliam Nicholson
Up Next