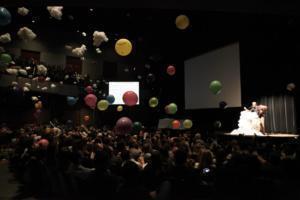 The Charleston Music Hall has announced that they will be taking over as the producer and facilitator for Pecha Kucha Charleston and intends to produce four events per year.

Pecha Kucha, Japanese for “chit chat,” is a presentation style in which 20 slides are shown for 20 seconds each (6 minutes and 40 seconds in total), keeping presentation concise, fast-paced, and powerful. Charleston Creative Parliament, made up of unpaid volunteers and community leaders, started Pecha Kucha Charleston on November 12, 2008. Since then, they have produced 26 events with over 150 presenters.

One of the founding members, Steve Warner, said: “We knew from data and observation that Charleston had a strong creative class, but it was mostly invisible and siloed. A small group of us launched Pecha Kucha Night as an experiment, as a way to bring the creative community together, to celebrate the depth and breadth and diversity of talent, to expose the hidden talent toiling away all around us – and I continue to be blown away by the response. It’s been one of the most fun and rewarding projects I’ve ever been engaged in, and it inspires me every time.”

Charleston Music Hall director Charles Carmody presented at Pecha Kucha (PK) 19 and immediately fell in love with the format, the event, and the people behind PK Charleston. He helped produce PK 20 through 26 and said he is excited to continue developing this fun and exciting series. Many of the original Parliament members will still be involved in future PK Nights, but these events will be held exclusively at The Charleston Music Hall.

The next Pecha Kucha Night will be held on October 5th in collaboration with the Charleston Arts Festival. More information will be announced on Monday, September 4th.

Follow us
Related Topics:charleston music hallparliament charlestonpecha kucha
Up Next