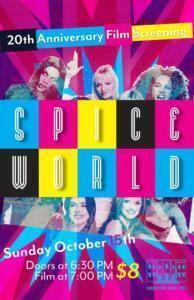 Spice up your life by visiting The Charleston Music Hall on Sunday, October 15th for a 20th Anniversary screening of Spice World, the 1997 musical comedy film starring The Spice Girls. The movie is celebrating its 20th Anniversary.

Scary, Sporty, Baby, Ginger, and Posh Spice took the world by storm in the late 90s, which led to the performers making this film. Attendees are encouraged to dress up like their favorite Spice Girl for a chance to win some sweet prizes. Anyone that dresses up gets a commemorative poster.

The bar opens at 6:30 pm, while the film starts at 7 pm. Click here for tickets.

“Climb aboard the double decker Spice Bus and get ready for a madcap musical adventure with the sexy phenomenons of pop – the Spice Girls. An encounter with extra-terrestrials, a night in a haunted castle, and a moment of truth in a maternity ward are just a few of the escapades the endeavored upon as the Girls gear up for their first live concert at London’s Royal Albert Hall.

The Spice Girls have become superstars and a global phenomenon. As they prepare for what may be their most prestigious concert to date at Royal Albert Hall in London, everyone in the world wants their two pounds of flesh from the girls at their expense. Their manager Clifford and his behind the scenes boss “The Chief” want to control all aspects of the girls’ lives with the sole goal of getting them to the concert in the best shape possible. A documentary film crew wants 24/7 access amidst the girls’ busy schedule. A Hollywood pitch team wants them to star in a movie, they pitching one outlandish idea after another. The London tabloids want to print whatever salacious story they can get their hands on, even if it ruins the girls’ careers. And even some out of this world visitors want what all their adoring fans want. Through it all, the girls, who want to have some fun along the way, evaluate their lives and wonder if they’ve lost sight of what is really important in life, those priorities, like being with their pregnant best friend Nicola, which may be incompatible with being pop superstars.”