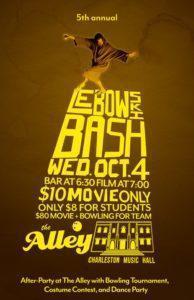 The Charleston Music Hall and The Alley are doing it again! The venues are teaming up for the 5th Annual Lebowski Bash on Wednesday, October 4th at 6 pm.


There are once again two ticket options, but each includes a viewing of the cult classic film The Big Lebowski at the Music Hall and a White Russian at The Alley After Party following the film:

The After Party at The Alley also includes a costume contest and a DJ Dance Party.