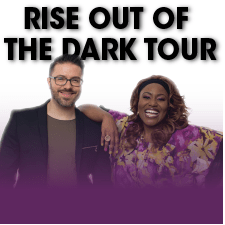 On Saturday, October 7th, America Idol finalists Mandisa and Danny Gokey will bring their “Rise Out Of The Dark Tour” to the North Charleston Performing Arts Center. They will be joined by Love & The Outcome and Jasmine Murray.
Mandisa is a Grammy winner that has sold over 1 million albums. Her first new record in four years, Out Of The Dark, earned the No. 1 spot on Billboard’s Christian & Gospel chart.
Dove Award Winner and two-time KLOVE Male Artist of the Year, Danny Gokey was a top 3 finalist on Season Eight of American Idol. Since that time, he has celebrated a series of No. 1 singles including his latest full album release “Rise.”

Endless Summer Party Returns to the Biergarten this Month