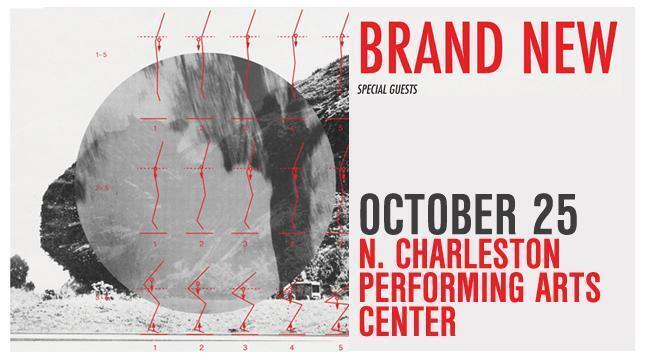 Brand New, the alternative rock/post-hardcore band from Long Island, will play at the North Charleston Performing Arts Center on Wednesday, October 25th at 7:30 pm. The concert may be the group’s last in South Carolina since they are expected to disband in 2018.

Along with their tour announcement, the band said their fifth album, Science Fiction, will be released in October. You can order the album (which includes an immediate download) here.

Brand New is known for their albums Your Favorite Weapon (2001), the certified gold Deja Entendu (2003), and Daisy (2009), which reached number six on the Billboard 200. You may also recognize their singles “The Quiet Things That No One Ever Knows” (video below), “Sic Transit Gloria… Glory Fades” (video below), “Mix Tape,” “Seventy Times 7,” “Jude Law and a Semester Abroad,” and “Jesus Christ,” which became their highest charting single in the U.S., peaking at number 30 on the Alternative Songs chart.