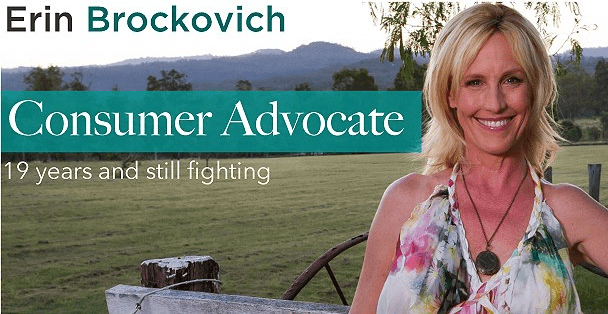 Erin Brockovich, the legal clerk and environmental activist who played a major role in the successful lawsuit against the Pacific Gas and Electric Company of California in 1993, has weighed in on the concerns regarding Mount Pleasant’s water quality.

Brockovich, whose story was told in the 2000 film Erin Brockovich, posted her take on Facebook last night. You can see her post at the conclusion of this entry, but first, here is some background on the story…

Mount Pleasant Waterworks (MPW) recently responded to citizens’ questions about water quality after some parents expressed concern to local media about a “potential cancer cluster” in the town – eleven kids who live within miles of each other have been diagnosed with rare brain cancers. This prompted some residents to use at-home test kits, which a few have said showed a pesticide presence.

Although MPW does not believe there is a problem with the water supply and urged caution about the use of at-home testing kits, they will have DHEC start testing today to be sure there are no issues.

Here is Brockovich’s take on the situation:

“There are more unanswered questions about Mount Pleasant and Charleston, South Carolina’s water quality than there are answers.

First, consumers in Mount Pleasant need to understand… most of the year your drinking water is supplied from the City of Charleston. At peak demands… as much as 50% “can be” produced locally… but many of you get 100% Charleston water everyday of the year. The attached press conference is more than just misleading, its crap… and constantly bragging about pristine ancient water that requires reverse osmosis is just bizarre. Further, the City of Mount Pleasant buys so much water from Charleston… several months out of the year they actually inject the severely contaminated excess surface water into Aquifer Storage and Recapture (ASR) wells.

Charleston claims to do thousands of water quality tests but doesn’t really report very much to you the consumer… the USEPA “suggests” they customize the report for the local source water conditions… Charleston DOES NOT.

Your source water has many pesticides (Dieldren), herbicides (Atrazine), pfoa/pfos (scotch-guard/Teflon), pharmaceuticals (estrogen/Viagra) and other “unregulated” contaminants in it TODAY. These should have been reported to you… some have health advisories, some have maximum contaminant levels (MCL), like atrazine. The herbicide atrazine… if detected, even below the MCL must be reported… it is not.

The citizens of Mount Pleasant and greater Charleston are entitled to more respect and full disclosure… What have they got to hide? If there are contaminants in your drinking water you have the right to make a choice of what your family consumes and what it does not.”

Fish Restaurant to be Become Parcel 32