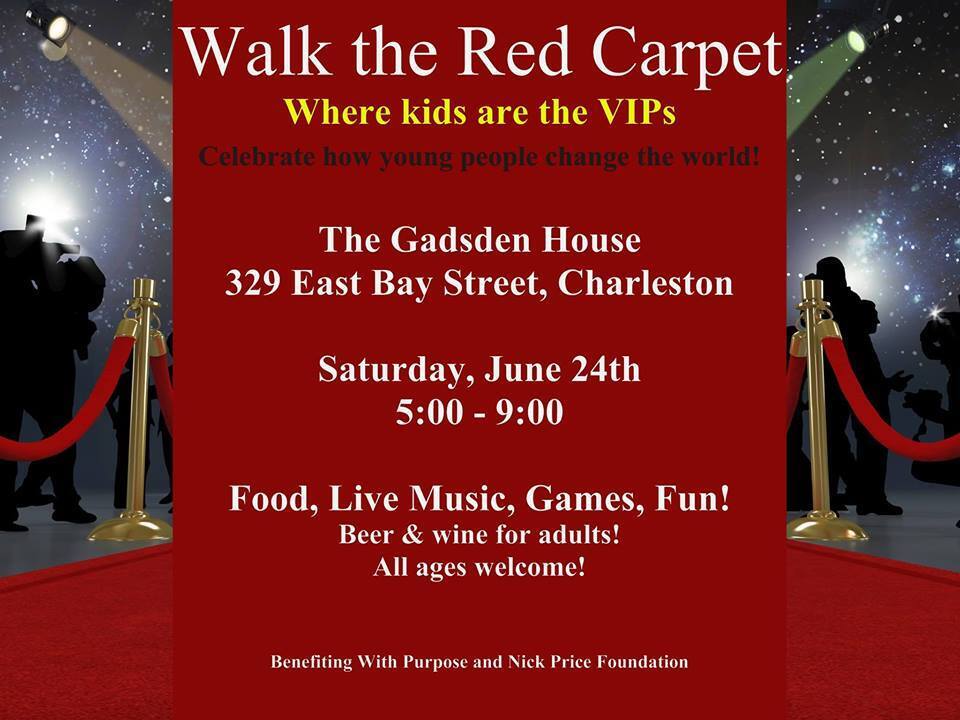 Two local cancer support organizations invite you to their Walk The Red Carpet event on Saturday, June 24th at The Gadsden House on East Bay Street. The party will run from 5 pm to 9 pm.

The family-friendly event will include music, appetizers, cocktails, face-painting, balloon animals, and more. A 10-minute documentary produced and filmed by a group of children will also be shown (preview below).

Tickets are $20 and can be purchased here. The Gadsden House is located at 329 East Bay Street.

The party was created by With Purpose and the Nick Price Foundation, two organizations that help families battling cancer.  You can learn more about each group below.

“Nick Price, a talented soccer player in Charleston, was diagnosed with pontine glioma brain tumor on January 29, 2015. This is a very complex hard to reach tumor in the pons area of the brainstem. The family traveled the country meeting with several different facilities and neurosurgeons trying to find someone who could get to the tumor without causing severe neurological deficits or worse. This part of the brain controls several vital functions of the body including voice, eyes, arms, legs, swallowing and breathing.

After getting several medical opinions, most of which said the tumor was inoperable, the family decided to let surgeons at Barrow Neurological in Phoenix, AZ remove the tumor.  The Price’s live in Charleston, SC, so they traveled across the country to have the surgery.  Drs. Nader Sanai and Robert Spetzler were confident they could get to the tumor and try to remove it.  They assured the family they would only get what they could while they were in there.  On June 18, 2015, his surgeons safely removed the tumor!!  Three weeks later Nick was back on the soccer field.  He had vision problems and weakness from the surgery he needed to work through but after six months Nick had no deficits at all.  He is now 100% and stronger than he has ever been.

Nick decided to start his own foundation to help others that have been given the devastating diagnosis of brain tumor and cancer!  He was so inspired by how others helped him that he wanted to do something to give back.  He wanted to pay it forward so he started the Nick Price Foundation!  He has written many checks from his foundation to help sick children and adults battling brain tumors and cancer.”

“It all started when our then two-year-old son, Sam, was diagnosed with DIPG, a uniformly fatal brain cancer.  Ten days later, his twin sisters Ada and Mae were born.  We were told the best modern treatment could offer would give him, on average, another year.  Because he was only 2, Sam was not eligible for clinical trials.

Inspired by the support of friends, family and perfect strangers and motivated by a deep desire to do SOMETHING, we started With Purpose.  Although we had ideas about what With Purpose could be, it was the young people in our life that took up the cause and made the organization what it is today:  a youth-led movement dedicated to creating a world where kids with cancer have access to safe and effective treatment.

Childhood cancer is the leading cause of death from disease among children in the U.S.  Today, 1 in 5 kids diagnosed with cancer will not survive.  For many pediatric cancers, there has been little to no advancement for treatment since the 1970’s.  With Purpose attacks three distinct pain points in the complex problem of advancing treatment for kids with cancer and, in turn, giving families hope for a better future.

How to Help Families Affected by James Island Apartment Fire