Patriots Point Naval & Maritime Museum and ABC News 4 are inviting families to watch the total solar eclipse on August 21st aboard the USS Yorktown. The event titled, “Eclipse on a Warship,” is included in the museum’s normal price of admission.

The first 3,000 visitors will receive a free pair of specialized glasses designed to protect their eyes while viewing the eclipse. An indirect viewing method will also be offered on the flight deck of the USS Yorktown for those who want to avoid looking at the sun entirely.

For those planning to join in the fun, Patriots Point recently announced an “early bird ticket option” for anyone who may want to be part of a live audience during the broadcast of The Today Show from the flight deck of the USS Yorktown.

The parking lot will open by 6 am, and the first 200 people in line at 6:30 am will be able to purchase their admission ticket for “Eclipse on a Warship” and board the USS Yorktown immediately. Here’s a look at the day’s schedule: 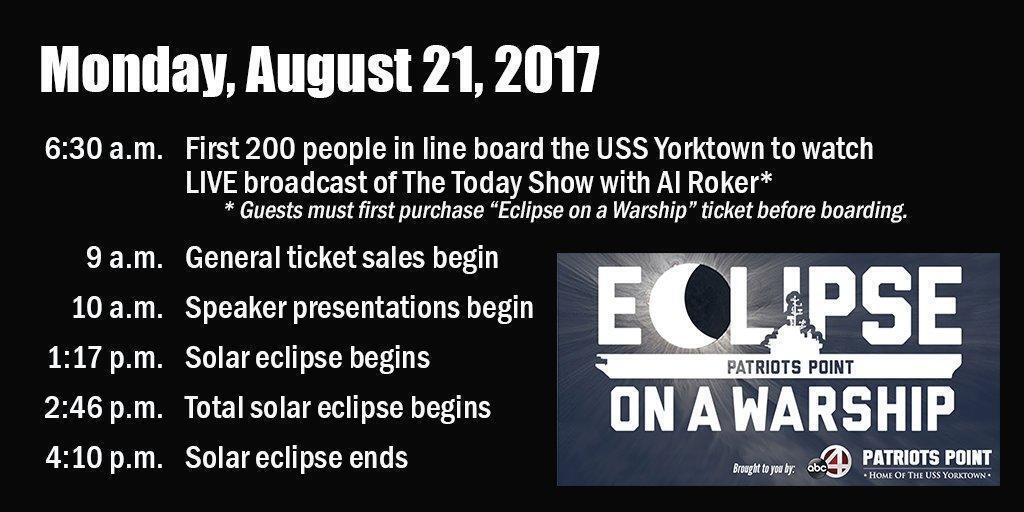 According to the National Aeronautics and Space Administration (NASA), Patriots Point is located within the path of totality. The path, which stretches from Oregon to Charleston Harbor, is where the moon will completely cover the sun. The USS Yorktown is expected to be in the dark around 2:46 p.m.

Before the eclipse begins, from 10 am to 1 pm, several NASA subject matter experts will give
presentations on eclipse-related topics. The schedule includes:

Featured presenters also include Dr. Kelly Korreck, a solar physicist at the Smithsonian Astrophysical
Observatory, and Dr. Christian Iliadis, Chair of the Physics and Astronomy Department at the University of North Carolina at Chapel Hill. All experts will be available for visitors to meet following their presentation.

Several children’s activities will be offered by the Patriots Point Institute of History, Science and
Technology and will be included in the price of admission to “Eclipse on a Warship.” Children’s Activities Include:

The USS Yorktown is forever connected to the U.S. space program. In December 1968, the ship’s crew recovered the Apollo 8 space capsule after it splashed down in the Pacific Ocean. The Apollo 8 astronauts were the first to orbit the moon and return to Earth.