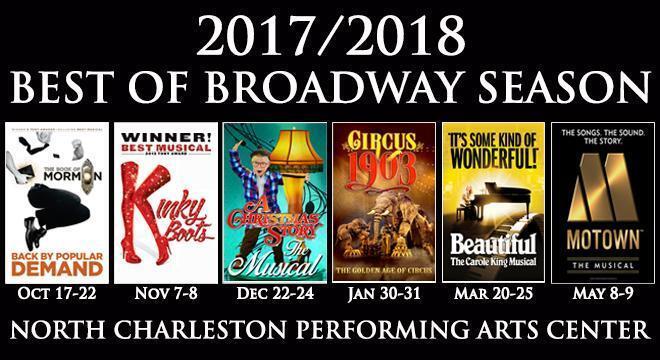 The popular “Best of Broadway” series has announced their schedule for the 2017-2018 season at the North Charleston Performing Arts Center. The series, now in its 19th year, will welcome six shows including the return of The Book of Mormon, which had a record-breaking engagement in 2015.

The new season will also include performances of Kinky Boots, A Christmas Story: The Musical, Circus 1903, Beautiful – The Carole King Musical, Motown The Musical, and The Illusionists present Adam Trent.

Although individual show tickets will go on sale at a later date, season ticket packages are already available. In addition to having the same seat for all performances, “Best of Broadway” season ticket holders get free parking, priority access to tickets for other Coliseum and Performing Arts Center events, and special discounts/offers not available to the general public.

Tickets are available at the Coliseum Advance Ticket Office, by calling the “Best of Broadway” hotline at -843-202-ARTS (2787) or online at www.NorthCharlestonColiseumPAC.com.

You can learn more about each of the performances here.